A snowy week at Chatsworth 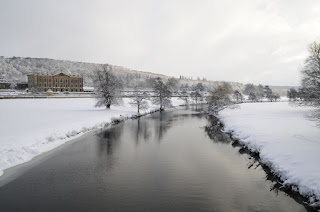 Over the past week we have had some very extreme weather here at Chatsworth, with over 2ft of snow falling and the temperature dropping to an astounding -17 degrees.  As a result the house, garden, farmyard, shops, restaurants and garden centre were forced to close on Wednesday, Thursday and Friday. The Farm shop was closed on Wednesday and Thursday, but has managed to re-open again today.

Only those staff living locally or those brave enough with 4x4s have made it to Chatsworth over the past few days. There have been plenty of tracks left in the snow across the park, mainly by staff walking from the neighbouring villages of Edensor, Beeley and Pilsley. There's been a real community spirit here, with everyone lending a hand to try and clear the roads and paths so that the house can re-open to visitors over the weekend. The heavy snowfall hasn't kept everyone away however, with someone being spotted skiing through the park, avid photographers such as our own Diane Naylor and Matthew Bullen braving the cold to take some beautiful shots of Chatsworth in the snow, and even a crew from Channel 5 News filming on Wednesday.

The house, shops and restaurant will re-open tomorrow, so we hope to see you there soon!

Posted by Chatsworth at 3:45 PM

can i just say a huge thankyou to all the catering staff that provided hot food and drinks to us over the last few days, it was very much appreciated and gave us much needed energy to shift vast quantities af snow (which i hope will stop falling)!
the estate looks stunning but i'm longing to see grass again.
thanks again from the gardens team,

What an absolutely stunning picture, I love Chatsworth, definately one of my favourite places.

Thought you might like to know, some staff did make it from further afield without the help of a 4x4. (they didn't always make it home though !)