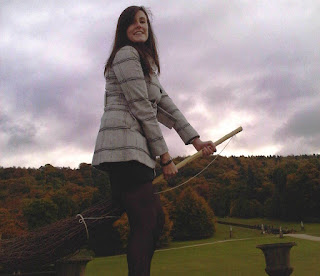 With Halloween on Sunday fast approaching, we are all getting into the spirit here at Chatsworth! There are pumpkins and bats dotted around the garden, Medusa and Perseus in the maze, a tunnel of spooky secrets, fright flights through Warlock Wood, and even Harry Potter’s broomstick on display in the house! There will also be a chance for you to make your own broomstick in the garden this weekend with one of our broomstick making experts.  I certainly enjoyed making mine, and it even seemed to have a little bit of magic about it!

Posted by Chatsworth at 3:01 PM 1 comments

Pumpkin carving at its best 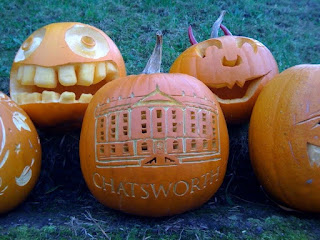 Although a life in numbers (I’m a Management Accountant) is exciting, enriching and full of fun, sometimes the creative side has to express itself, and produce something a bit different.

When the Finance team heard that pumpkin carving was being held in honour of Halloween, it was quickly decided that we would be taking part; it was also quickly apparent that I would be doing the carving duties (I was the last one to take a step back when volunteers were asked for!)  A colleague, Mandy Rivington, had a brainwave that a full detailed reproduction of the house would be a good idea (Bear in mind that this idea came after the carver had been selected) Despite my protests that my skills lay predominantly in Excel and not in fashioning stately homes in seasonal fruit, it was unanimously decided that this would be the pattern…. no pressure then.

With the hopes and dreams of the Finance department resting on my shoulders, I took up the gauntlet (and an extremely impressive pumpkin from ), strapped the seatbelt on ‘Pumpy’ as I had nicknamed him, and made my way home to embark on my mission.

The response to Pumpy has been remarkable and a truly humbling experience. Just this morning I had to turn down an order of 10 more for sale in the farm shop as, at 3.5 hours labour per pumpkin, I would have to give up the day job!

My pumpkin is on display in Flora’s …other valiant efforts by the Chatsworth team are also scattered through the garden.

Posted by Chatsworth at 3:20 PM 1 comments 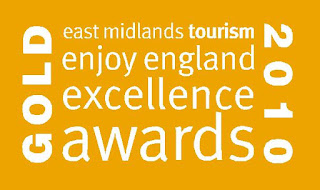 Last week Chatsworth scooped two top prizes at the East Midlands Tourism Enjoy England Excellence Awards. Chatsworth won the Gold Award for Large Visitor Attraction following an ’outstanding’ mystery shop. General Manager of the Chatsworth House Trust, , and Head of Trading, , collected the prize to loud cheers of support from fellow finalists and award winners. The National Space Centre was awarded Silver and they were pleased to have been beaten only by Chatsworth.

The Duke and Duchess also received a special award for Chatsworth’s Outstanding Contribution to regional tourism. We are all delighted that our dedicated work and the investment in Chatsworth has been recognised by East Midlands Tourism, and we hope Chatsworth will remain one of the UK’s best tourism attractions to be enjoyed by generations of visitors to come.

Posted by Chatsworth at 3:11 PM 1 comments

Success at the RHS Autumn Show!

Everyone is really chuffed that we have again had a successful year at the Royal Horticultural Society Autumn Show in .  Our ‘Muscat of Alexandria’ grapes again won first prize for two matching bunches and second prize for a single bunch.  If you are visiting you can see many more bunches of the prize winning grapes within our vinery, as well as some of the selection taken to London on their display boards, these will now be harvested right up until Christmas.  We also came first with a selection of six herbs and a Melon all grown in our three acre Kitchen Garden.

Today marks the start of the first Chatsworth photography competition, in conjunction with Harrison Cameras Sheffield and Canon. The competition will give budding amateur photographers the opportunity to share their favourite pictures of the estate; it could be a big view, a shot of the sun glistening off the house, a glimpse down the cascade or a misty morning in the park.

There will be a category for adults (over 16) and children with the winners receiving a host of prices including vouchers to spend on Canon photography equipment at Harrison Cameras Sheffield as well as Gold Family Friends membership to Chatsworth. Shortlisted images will be displayed in The Stables at Chatsworth in February next year.

The winning pictures will be selected by a panel of judges including the Duchess of Devonshire and Lord Burlington who will be looking for pictures they believe truly capture the spirit of Chatsworth- so why not give it a go!

Further details, including terms and conditions and how to enter can be found on the photography competition page on the website- http://www.chatsworth.org/photography-competition The competition will close on 30th November 2010.