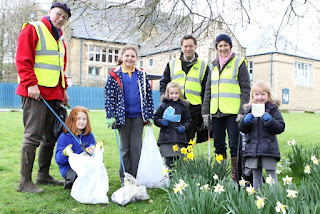 We held our annual estate litter pick on April 1: this year we were joined by George Wolfe, the chair of the local branch of the Campaign for the Protection of Rural England (CPRE). It was good to have George with us, as the CPRE and especially their President Bill Bryson, are the main anti litter voice to be heard in this country.

But is that voice loud enough?  Litter is unnecessary, wasteful and very dangerous to farm animals, and it also makes our countryside look as though we don't care for it. Local school children from Pilsley C of E School also took part in the litter pick, which taught them about the problems dropping litter cause. But I believe we still need to do more: I have suggested that George Wolfe asks his branch to propose a National Litter Pick Day and I can think of no better date for this than April 1, every year.  I do hope that the CPRE pick up this idea and support it energetically.

Posted by Chatsworth at 9:54 AM

Never let anyone stop you from imagining a clean environment.

Health is a result of environmental signals to your DNA.