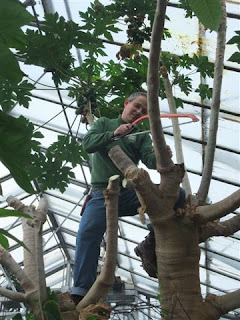 Work inside the glasshouses continues apace.  The annual vine scraping is underway (yes literally scraping every bit of loose bark off with pen-knives to remove anywhere for mealy bugs among other baddies to hide!).  Other areas are being pruned and scrubbed ready for the new growing season and, in the 1st Duke’s and Display glasshouses Camellias are already blooming.  The area that needs most attention is the tropical section of the Display House; because of the high temperature and humidity everything seems to grow as you watch.  Particularly plants such as the ‘Cavendish’ dwarf banana and sugar cane need regularly chopping back to keep them from spilling across the path and into the pond!  As the largest tree, the Pawpaw has from time to time to be seriously reduced in height; and this winter with the tips and fruit touching the glass it was that time!  As you can see it has been cut back to the trunk from which it will shoot and quickly be producing wonderful fruit again, you can just see the last of this year’s un-ripened fruit over Ian’s shoulder. 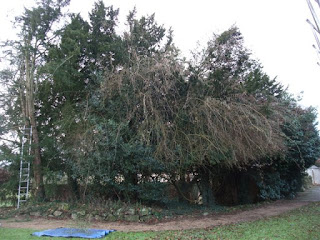 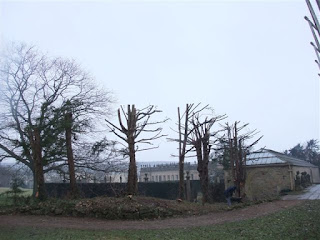 One of the many things going on in the garden at the moment is some fairly major clearance and pruning around the 1st Duke’s and Display Glasshouses.  This area had become very dark and over-shadowed, making the serpent terraces very dank and unappealing, but not any more - views out and more light makes all the difference!  Most tree and plants have been cut back and will be kept under control in the future such as these Yews that had grown far too tall.  They also had a tangle of rose and dead wood which was not in keeping with the formal part of the garden and it restricted new plantings from becoming established.  The area will now be cleaned up including treating invasive weeds and adding a new stone edge and then the area will be under planted with plants that will take advantage of the favorable new conditions!

Posted by Chatsworth at 9:46 PM 0 comments 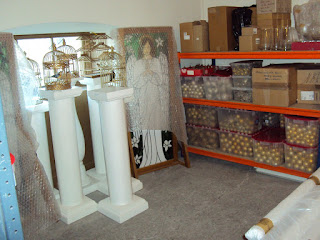 We’re very excited about next Christmas! It seems crazy to be thinking about Christmas 2011 already, but we need to start our planning in good time so that we can have everything in place. Our theme for 2011 will be Deck the Halls: A visual celebration of carols at Chatsworth, which we anticipate will be traditional, but with the odd twist. However, it’s not just the detail of the plans that have been enthusing us recently, but the new Christmas store room we have fitted out in the Lime Ash – one of the rooms in the attics that have become vacant as a result of the Attic Sale last autumn. For the first time since we starting opening part of the House for Christmas in 2001, we shall have all our Christmas decorations in one place – fantastic!

Posted by Chatsworth at 5:57 PM 0 comments

Art growing in the garden 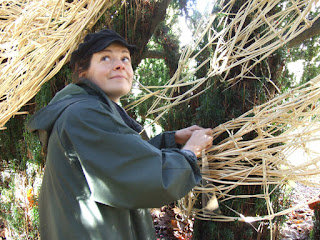 I'm an artist based in Derbyshire (originally from nearby Darley Dale) and I'm thrilled to be returning to Chatsworth to create a sculptural archway for the Kitchen Garden.  This is one of my favourite parts of the garden as the cycle of organic growth is most prevalent.

I met with the Duke last week who approved the creation of a large willow arch and 3 corresponding pieces that lead up towards the archway.  The design is very simple, but quite epic in scale!  I'm hoping the forms will carry a notion of growth, perhaps in the way that a seedling curls and forces its way out of the earth; the large arch should feel like it's growing from the slope whilst the 3 smaller forms are 'pulling' their way towards the nutrients of the garden.  The sculptures will be mainly willow, from , but will also use oak from the estate and bamboo from the gardens.

So far I've been involved in the groundwork preparations, which has involved using trunks and branches from thinned oak to help reinforce the structure - the team on site who have helped me with this are fantastic, all smiles and enthusiasm, it's been lovely to meet them.  It never ceases to amaze me how much work goes on behind the scenes in the house and garden, I can't comprehend how the team manage to balance it all!

The main archway should be complete by mid March, with the 3 smaller pieces 'climbing' their way up the path shortly after.  Watch this space!

The gloves are off! 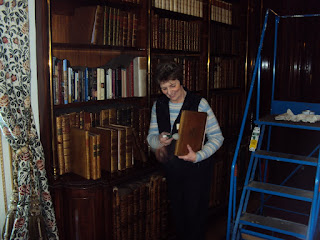 The domestic team have now moved into the Ante-Library, and are working their way through the cleaning of the furniture and books. The outside surface of the book is very gently dusted with a white duster, and then the edges of the pages themselves dusted with a fine brush to dislodge any dust that might be trapped there. We used to always wear white gloves when handling books, but the current expert thinking is that the use of gloves prevents the user from handling the books carefully enough, so for now, the gloves are definitely off!

Posted by Chatsworth at 1:53 PM 0 comments 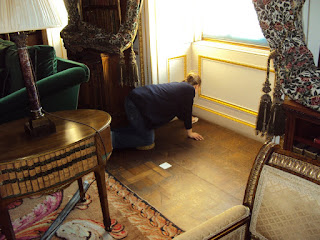 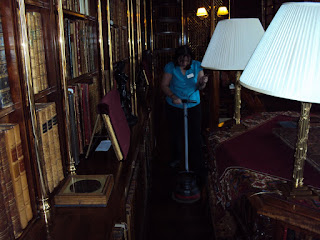 We’re busy at the moment with the deep clean of the House during the brief ten weeks that the House and garden are closed to visitors. Yesterday we completed the cleaning of the Library and the final activity once all 17,500 books have been cleaned, the furniture polished, and the upholstery vacuumed, is the polishing of the wooden floor. A machine helps in some spaces, but in others it’s just a matter of getting down there and getting stuck in!

It’s a real privilege to be able to work inside this amazing room, which is definitely one of our favourites.

Posted by Chatsworth at 3:00 PM 2 comments 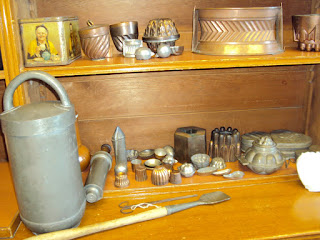 We have a series of winter talks planned every Friday morning at the Stables until the House and Gardens re-open in March, and I’ve had such fun getting together objects for the second talk I’m giving, on Friday 25th February. The talk’s called Curios from the Kitchens and I plan to bring along some of the things I’ve found for people to look at, from a tin opener with the business-end shaped like a bull’s head, to a slipper of ale for mulling beer, and lots of other things besides. People will also be able to see some fantastic equipment for making ice creams – it’s amazing how elaborate some of these ice creams must have been, and it fascinates me to ponder how they managed to achieve so many of them before the age of refrigeration!

Posted by Chatsworth at 9:23 AM 0 comments

What's going on in the garden 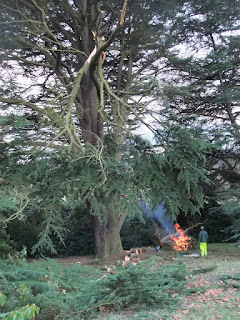 Well, hopefully we have seen the last of the snow for the time being and we are able to get on with some of the long list of tasks we hope to achieve before we open again in March.

In all areas old vegetation and debris is being cleared, glasshouses are being scrubbed and bare ground dug in preparation for Spring.  In the main garden we are still clearing up fallen and broken branches from the snow, the final round (hopefully) of leaf clearance is nearly completed, streams have been cleared out, the canal pond is being drained ready for essential wall repairs and the final few sculptures from last autumn’s ‘Beyond Limits’ are being removed.  Next we will start on essential tree safety work, cutting back over grown plantings, re-vamping tired areas and the planting of a variety of trees, shrubs and perennials.

You can see from the picture just some of the damage the snow has caused; Cedars have a dense covering of needles and brittle wood and are therefore particularly susceptible!

Posted by Chatsworth at 1:35 PM 0 comments

I was lucky enough to be invited to open an exhibition of paintings by Bert Broomhead by his daughter Amaryllis Rae on Saturday 8th January.  This was at the Quadro gallery in the Dobbie’s at Barlbrough.  Unfortunately it was only on over the weekend but Amaryllis is organising a longer exhibition of Bert’s paintings, watercolours, drawings and etchings in Bakewell some time this summer and I will make sure that I mention it as soon as I have the date.

Bert Broomhead is a very interesting artist, who painted many evocative scenes around Derbyshire and particularly in Bakewell where he lived.

Posted by Chatsworth at 4:26 PM 2 comments