3D TV in the house 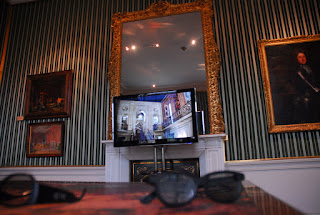 I'm really excited to have helped install a huge new 3D television in the Green Satin Room. The TV shows a 3D documentary by Sky Arts 3D for a series called Treasure Houses of Britain, in which Chatsworth had a whole episode that repeats continually on our TV throughout the day. The Green Satin Room is dedicated to being much more interactive than many of the other rooms in the house - visitors are free to open the drawers and touch fabric samples, and now can pick up a pair of 3D glasses and watch for as long as they like before moving on to continue their real tour of the house. The 3D footage is really remarkable; there were many gasps of awe when staff viewed it, even from those who have been here for decades because of the amazing panoramic shots and aerial views.

Posted by Chatsworth at 4:37 PM