My work experience at Chatsworth

For the past two weeks I’ve been on work experience as part of my first year in Sixth Form. For the first week I was at the Estate Office in the IT Department working with Ian Hughes and Matt Guest. I chose this because I’m especially interested in computing. Living on the Chatsworth Estate all my life I thought it would be rather relevant if I found out all the ‘behind the scenes’ stuff including all the office staff who keep the company running smoothly.
Ian and Matt showed me loads of really interesting stuff and I found out about how the people in the house communicate with the staff in the offices in the village of Edensor. I was also shown what they do as part of their job - they fix problems on people’s computers and can do this without having to leave their office; they can do it using their own PC.
In the second week I spent 3 days with the Marketing Department with Cat, Steph and Chloe. Their offices were all the way up in the attic so I had a massive job of climbing the many stairs. They showed me the exit to the roof and I saw all the corridors that the maids would have once run along. This was really interesting for me as although when I was younger and I came to work with my mum for lunch at weekends, I haven’t been able to see all the behind the scenes work.
Whilst I was there Chloe was working on the Chatsworth website, and Steph helped create posters for the Country Fair.
Overall I’ve had a fantastic time at Chatsworth, and would like to say thank you to everybody who has made me feel so welcome.
Naomi White
Work experience
Posted by Chatsworth at 11:16 AM 0 comments

A tour of the Chatsworth Masterplan 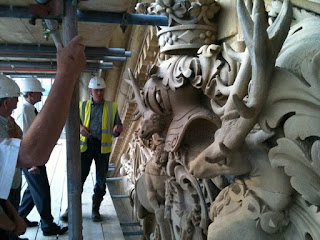 On Monday I was lucky enough to take part in a special Masterplan tour for staff, led by Head of Special Projects, . Adorned in our hard hats we spent an hour or so on possibly the most thrilling and engaging tour I have had the pleasure of being involved in during my relatively short time at Chatsworth. The view of the estate from the top of the scaffold was a beautiful, but minor diversion, from what was a once in a lifetime chance to get up close to parts of the building. The tour itself was hugely engaging and took in everything from the dolphin fountain and the carved stalactites at the foot of the west front steps, to the soon-to-be gilded balls atop the urns along the west and south fronts of the house. The absolute highlight for me though was to be able to get up close and personal with the carvings on the pediment above the west front as well as with the centurion which stands above. It felt like a real privilege to be able to take part.
For visitors to Chatsworth, you can climb the scaffolding to our special visitors’ viewing platform to see the restoration work up close and enjoy some rarely seen views of Chatsworth. Tours run every day at 2pm and 3pm from the Lion Steps in the garden and cost £2 per person.
Paul Hayes
Front of House Manager
Posted by Chatsworth at 2:25 PM 0 comments